Apr 27: Update - For years I've said that Damascus' destruction [1] is the first “bad news” end time event (after Yeshua's Good News finally returns worldwide [2]). But when? Before or after the 70th Week starts in 2024? Since 2005, it's been left ambiguous on my book's Revelation Roadmap because Scripture does not specify. Now, through two dreams that God gave me years ago and some recent new inspirations and deductions, I finally have a good idea of the year and am ready to share it with supporters. (One went bonkers when I told her.) Also find out what type of community Judea will be, how soon you can go there and even can you bring your pets? Perhaps what it looks like now from Katrina's dreams. Lastly, if moving to Judea is so soon (for some), what behavior I heard God say to work on now...

Since the earliest editions of Know the Future, the next expected event in Bible prophecy has been the M.E. Nuclear War [1]. This is the conflict by which Damascus shall finally have “ceased to be a city and become a ruinous heap” (Isaiah 17:1). From what Isaiah and Psalm 83 say, Israel is attacked (for a fourth time since 1948) by an overwhelming coalition of Arab neighbor nations. Israel responds to this existential threat by using nuclear weapons, the so-called “Samson Option,” something Israel has threatened in two past conflicts (1973 Yom Kippur and 1990 Gulf War). This scenario explains how Damascus is both destroyed and never rebuilt as it would be after an earthquake. The nuclear fallout prevents the resettlement of Damascus as it did for the Chernobyl reactor's worker town of Pripyat. As a result, the world's oldest continuously inhabited city will remain ruins despite being the capital of Syria (at least until the restoration of all things in the Millennium).

The question that has always dogged me about this event is when does it happen relative to the start of the 70th week? There are events inside the beginning of the 70th week that depend on this war happening first. The chief and most obvious example of this is as our move to a “believer's settlement” in Judea [13] starting in 2024 for safety from WW3/Wormwood in 2026 or the so-called “beginning of sorrows” [14] per Joel 2:32=Matthew 24:16. Non-Jews are not allowed to reside in Israel [15] and it will take the heavy casualties and need for aid in the wake of war to even temporarily change that longstanding immigration policy.

However, whether this war starts inside the 70th week (right after it begins) or some years before that has remained a question. The challenge is that this war is only described in OT prophecies and not in the chronological framework of Revelation. This uncertainty has been reflected in the Revelation Roadmap chart by ambiguously showing the war event (2nd box from left below) as straddling a stretch of the chart before the start and after the start of the 70th week (with a footnote explaining this). 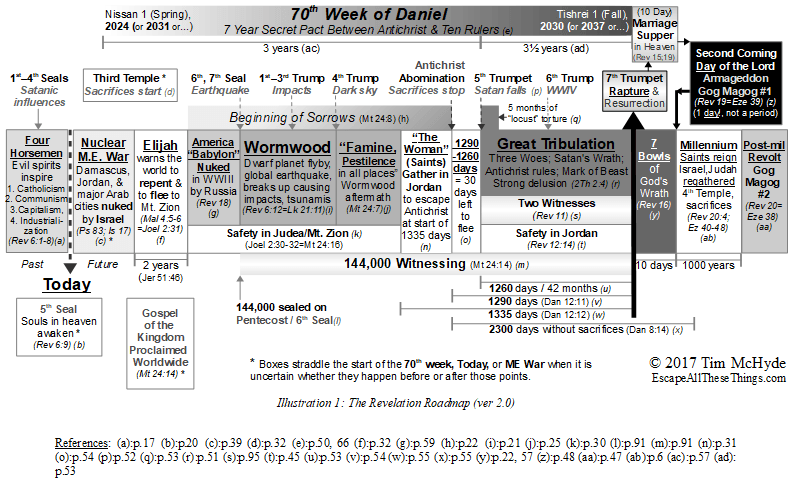 Now thanks to some dreams, some events around my 50th birthday and some resulting deductions, I can answer with confidence the question of both when it happens relatively speaking and even what year it will be. (The chart above will need an update!)

There are two dreams which led to three new insights I have to share with supporters about 2022...

If you have not already done so, be sure to read the earlier study on 2026 [16] before proceeding as that will lay the foundation of the 70th week needed to understand the chart above and the article below.

To Read the Full Study...

To read the rest of this 9,000(!) word study and understand what my (and Katrina's) dreams are leading me expect in/by 2022 , please join my support team monthly or even for just one month (no monthly financial commitment required). I appreciate your material support in exchange for helping me to continue to bring forth spiritual support (as Paul taught in 1Co 9:11, 14) for the saints to finally learn God's will and to do it (Lk 8:21=Mt 12:49-50=Mk 3:34-35). If you cannot afford to join the Support Team at this time, I understand. Please enjoy the hundreds of other free studies on this site instead!

[20]If you liked this article, you will LOVE my book, Know the Future [21], a comprehensive, literal explanation of end time prophecy read by over 25,000 people since 2005.

Print page cleanly (Javascript must be on) [22]